The Team in Oz
National Context

Unlike many Anglophone nation-states in the world, Australia’s educational system and educational leadership approaches have been historically borrowed from overseas. When asked to evaluate the Australian education system in 1938, Isaac Kandel, a founding father of comparative education, complimented it mostly for its efficiency. He remarked on its high degree of centralization, provision of equality of educational opportunities, and uniform teacher training.  However, he also argued that its efficiency has come at a cost.  Education at primary and secondary levels were considered overly standardised, unimaginative, and static (W Connell 1980: 114).

Over its history, Australia’s highly regulated environment has persisted in an attempt to enhance teacher quality, but while there is ongoing public support to scrutinize the educational system because it is subsidised by the public purse, the correlation between the profession and enhanced quality outcomes for students continues to be inconclusive if not contestable (Bahr & Mellor 2016).

Liking de Tocqueville’s observation about political problems ending up in the courts, Australia’s educational system has become marred by increased legislation, which includes countless mandatory requirements, formal certifications, audits, accreditation, Occupational and Health and Safety compliance, among others. It is as if the demands of the educational leader require the leader to be superhuman; to serve as priests, psychologists, therapists, political reformers, social workers, sex advisors, along with performance of administrative ‘day-to-day’ duties and responsibilities to remain compliant.

Educational leadership in Australia appears to be appraised not in terms of a leader’s educational ability or capability, but for the leader’s willingness to subject himself/herself to higher levels of public accountability.  This is a far cry from the initial intention of the school—a place to teach and learn—which was typically composed of both teachers and students and not administrators.  It also could undermine the ability of the educational leader to improve, expand, and enhance the teaching and learning developed within the school.

Instructional leadership is therefore an attempt to help support and guide those who are seeking ways to lead, mentor, and guide ‘good’ teaching and learning practices by putting the teaching and learning process at the center of school leader decision-making.  In the case of Australia, Figure 1 reflects governmental bodies and other key stakeholders who have influence on instructional leadership.

Figure 1: Influences on instructional leadership, policy and practice in Australia 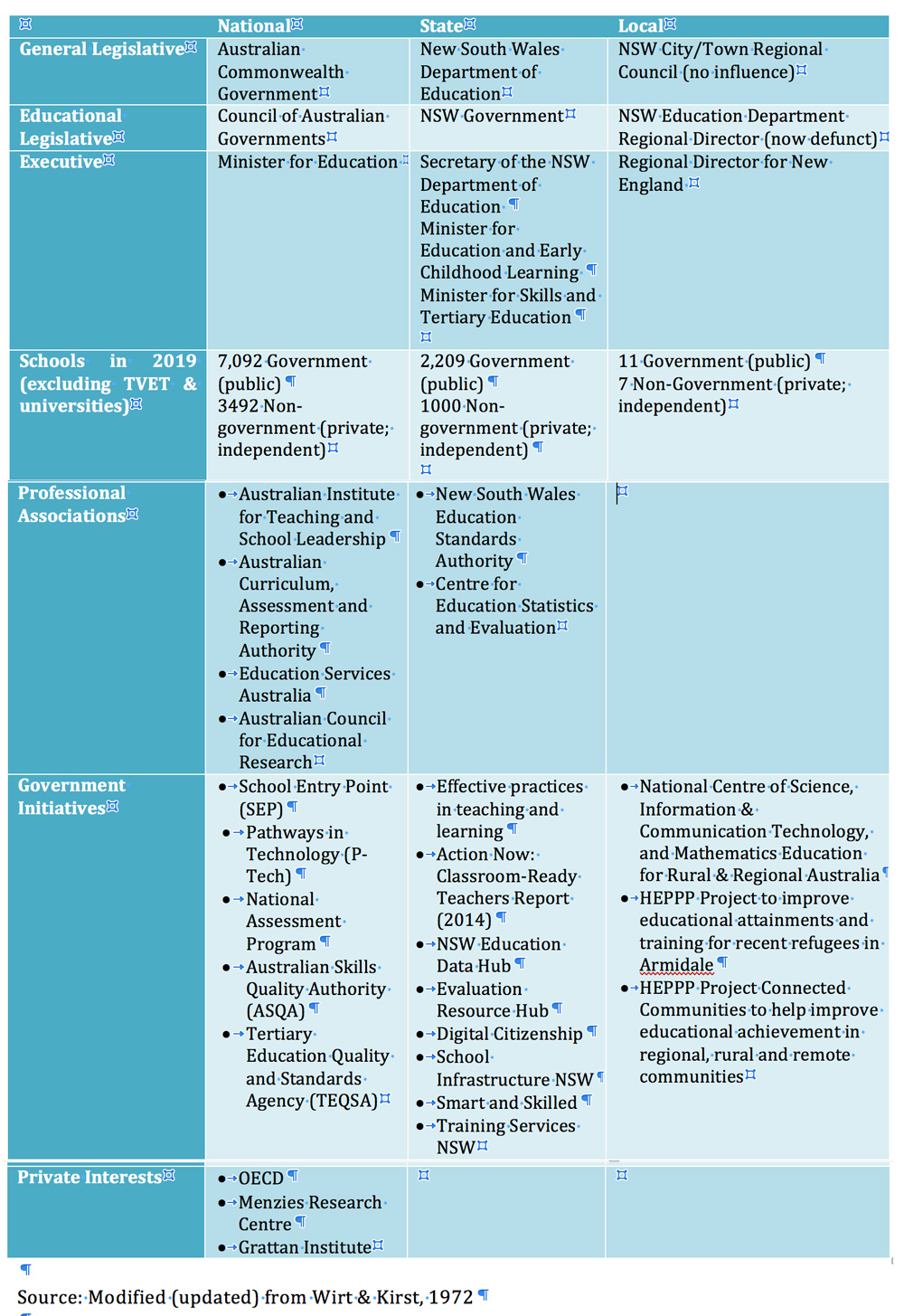 Notwithstanding an over-reliance on accreditations, audits, reviews, and evaluations, Australia’s education system has arguably been overburdening many educational leaders to strive to meet minimum standards for the sake of compliance, and the teaching of students has defaulted into a perceived deficit model of teaching, resulting in a pedagogical approach to “correct” students’ “deficits” rather than enabling students to draw out their tacit knowledge through questioning, class facilitation, and interactive engagement in teaching material. Assessment is similarly disconnected from the teaching process.

A further complicating factor is that Australia continues to have educational disparities in learning ability and self-efficacy, particularly with marginalized groups including Aboriginal and Torres Strait Islanders, refugees, and migrants. Much of this refers to how Australia approached education in the historic past, from assimilation policy through schooling to the recognition of other cultures in individual educational subjects. The transition toward the latter has helped diversify teaching and learning approaches to education, but disparities and inequities continue to challenge the system. 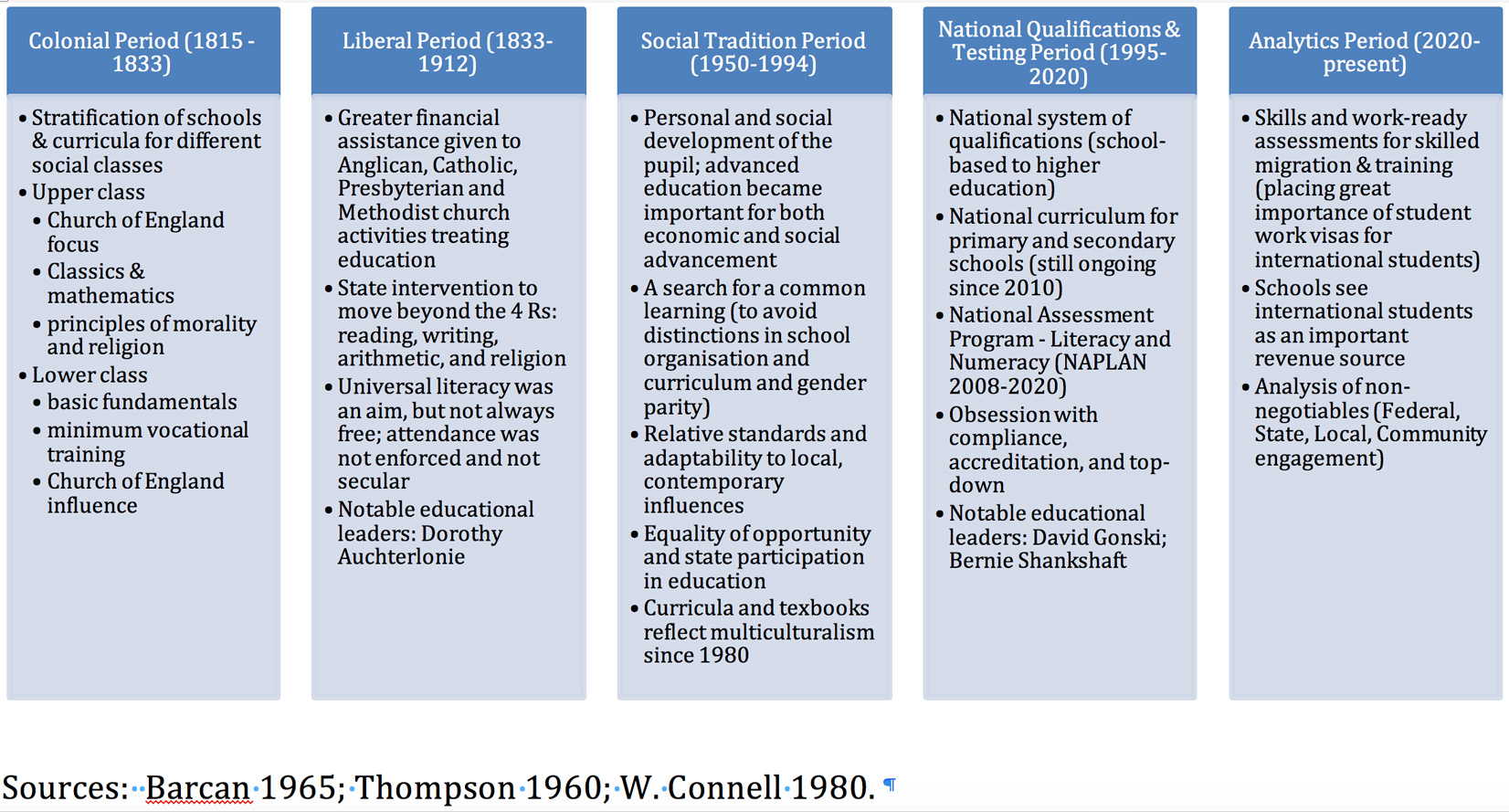 Should the current emphasis on analytics continue, it is possible that a shift will occur, with the Australian educational system placing greater value on what a student has learned (skills, ability, and capability) rather than on how much a student has learned (during the National Qualifications & Testing Period). This affirms David Gonski’s 2.0 agenda, which was a radical approach to emphasizing learning progressions independent of year or age, an education that aligns well with employment prospects, and the recommendation of a national institute to share best-practice in teaching and learning.